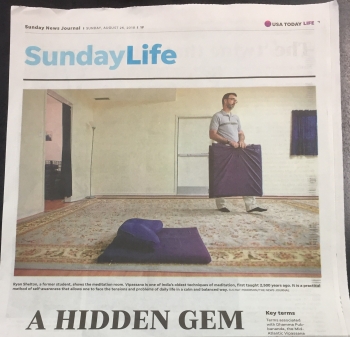 My wife and I moved to Delaware four years ago to support the opening of Dhamma Pubbananda, a new center less than 3 hours away from New York, Washington DC, Philadelphia, and Baltimore. The unique property is nested in a suburban neighborhood surrounded by 30 townhomes and 30 single family homes. When you step outside the Dhamma Hall, just beyond the 6 foot fence is a community of people living simply living their lives. This was an exciting experiment because because the center is easily accessible by so many people, but there was always uncertainty regarding how the Center would be received by the local community. Up until now, the Center has mostly kept to itself with minimal interactions with the community, but an opportunity presented itself to engage the community.

In August, Maria, myself, and several other meditators were asked by a reporter if we would be willing support an article on the Center. While I had concerns about whether I could skillfully represent the mission of the Center in a way that would be received correctly and positively, I decided to give it a try with the support of our Center Teacher. Several weeks later I was shocked and excited to see my face in the featured picture on the cover of the Sunday Life section of The News Journal with the caption, “A Hidden Gem.”  The article (found online here) skillfully reflects the positive mission of the Center and includes a wonderful video about Vipassana online. As mindfulness and meditation spread throughout Delaware, I’m excited that the local community now knows it has a meditation gem in its backyard. I’m excited to continue riding the wave as dhamma spreads in our world. Time to meditate.