I served as a Peace Corps Volunteer in a rural village near Tissamaharama in southeast Sri Lanka between 1994 and 1996. I feel fortunate to have been sent to a Buddhist country as that was my first coming into contact with Dhamma. From the first time I saw a Buddhist monk, I felt great fascination, resonance, and veneration.

With six months to go in my time there, some of my villager friends were talking about a western forest monk, the “sudhu hamduru”,  who lived about 5 miles away close to the ocean.  I told them I’d like to visit and asked if someone could communicate that to him.  I soon heard back that it was ok and within a day or so I got on my bike and rode down the pot holed village roads to his dwelling.  He lived in an area near Bundala, which is a National Park and wild life refuge.  To get there I rode through several adjoining villages, as usual people along the way would smile, wave and call out, “hello sudhu mahateya” ( a respectful name for a white man). Then, the houses became sparser and the arid desert forest more pronounced, a local villager led me the rest of the way. We got to a bend in the road where there was a trail and we walked our bikes through the trees, brush, and cactuses to his small hut. His hut was a one room dwelling called a kuti.  It was built out of brick, mortar, and plaster with a tin roof over it. There was a covered walking area outside his front door where he could do walking meditation and hang his robes to dry. 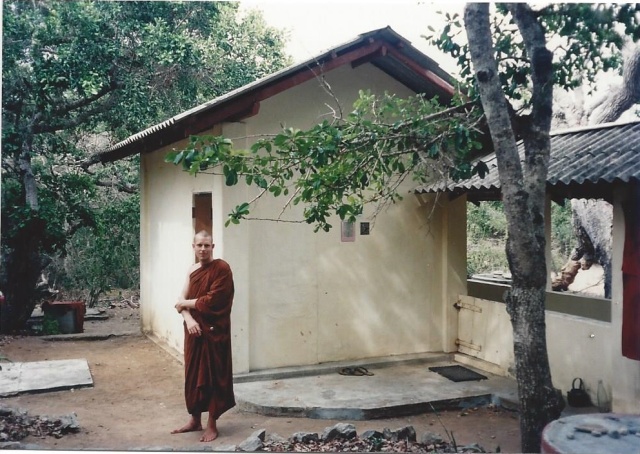 His name was Bhikkhu Vappa and he was a young man about my age, 25 at the time. He was from the Netherlands and I believe he’d been a monk for a few years. Traditionally a monk stays close to his teacher for the first 5 years and then if given permission can go out his own. He’d recently moved out to this dwelling to live in seclusion and went through the local village of Bundala every morning to collect his food for the day. I remember him saying that a well known western monk living there in the 1950-60’s had committed suicide, apparently the monk claimed to be a sotapanna and suffered from severe gastric pain, here’s a wiki article on that monks life, (https://en.wikipedia.org/wiki/Nanavira_Thera),  the monk living there after Nanavira had died from a poisonous snake bite. After this, a Danish hermit monk named Nanadipa had lived there and to this day still practices out in the wilds of Sri Lanka. Here’s an article about him (http://bhanterahula.blogspot.com/2010/10/meetings-with-remarkable-monk.html ) Bhikkhu Vappa seemed ok with the history and his being there. He was very bright and learned and was very immersed in sutta study and pali translation. He also meditated and said that he had some powerful experiences on meditation retreats which led him to take robes.   He was very enthusiastic that I start meditating and encouraged me to read a book called “Mindfulness in Plain English” by Bante Gunaratana. We practiced anapana together and he was very encouraging that I go to Burma to ordain with Pa Auk Sayadaw after finishing Peace Corps as the conditions for supporting meditation was much better there he said.  After Peace Corps is when I came across vipassana as taught by Goenka and spent the next few years sitting and serving courses.  I also stayed at meditation centers and monasteries in Sri Lanka and then to Burma to become a monk for a short time.

At this point in Peace Corps, I had a lot of down time with projects completed, so I went out to visit him quite often. I was lonely from going weeks without the company of westerners and was very drawn to learn from him. We had long engaging conversations. One day he took me out to scout elephants in the forest outside of his kuti as they were migrating through the area. He said that you needed to be careful because sometimes they would stand still and you wouldn’t know that they were there and they could get scared and go wild. Nanadipa, the prior inhabitant of the kuti had been knocked down by an elephant at another location, you can read that story in the above link.  Bhikkhu Vappa was like a master animal tracker and would look, listen and pay close attention to the surroundings.  We came across a family of elephants and watched quietly from behind some trees. The ocean was about a 1/4th of a mile down a trail, and we’d walk out onto a pristine untouched beach where you did not see any people or human dwellings for as far as you could see. 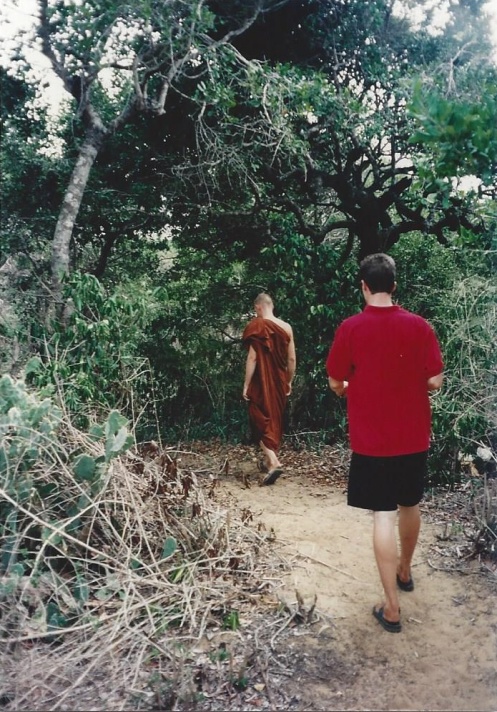 Another time, he took me to a temple within Yala National Park called Sithulpawwa which was built in the 2nd century BC. There is an ancient stupa there from the Buddha’s time.  It was located in an area where there were enormous rock formations which formed caves where monks had meditated for over two thousand years. It is rumored that arahants had meditated there in ancient times and it had been a serious monastery for meditators.  It was way off the beaten path, not known to tourists at the time.  Only Sri Lankan pilgrims came to visit the temple, I never saw anyone who wandered up to the caves. Bhikkhu Vappa said that the temple monk wouldn’t let wandering lay people stay in the caves but it was ok because I was accompanied by a monk. We stayed for a few days in a spacious cave which overlooked the jungle with the ocean in the distance. The walls of the cave had inscriptions of the ancient Brahmi script and had chisel marks everywhere. The caves had been chiseled and crafted to make them habitable.  Some of the other caves had pictures from the Buddha’s time. It was very placid and quiet.  There was a serene sense of timelessness as if it was 2000 years ago. At night you could hear the animal sounds of the jungle and a distant remote light house flashed out in the Indian Ocean. Sleeping on the rocky ground gave a new meaning to the 8th precept of not sleeping on high cozy beds. We had a lot of life and Dhamma discussions, it was such a unique time having been immersed in Sri Lankan rural life for almost 2 years, far away from life in the US, my mind was wide open to take in new things.  I would go with him to the temple for the mid-day alms meals and bathe in an ancient man made bath which still had the ancient irrigation system flowing fresh water through it.  There were gray monkeys with black faces throughout the rocks and in the trees.  After staying there we hiked almost 18km through the jungle to Kataragama where I met some fellow Peace Corps Volunteers.  We encountered an elephant along the trail which we had to go around, we also saw leopard footprints and weathered many ticks. Looking back it was quite an adventure.

In the final weeks, he invited me to go to Kandy with him to visit Bhikkhu Bodhi who is an American monk and was the editor and president of the Buddhist Publication Society. He is well known for translating the Majjhima Nikaya and Samyutta Nikaya texts amongst other great scholarly work.  Bhikkhu Bodhi had given a talk to my Peace Corps class during training and later on, I would serve him for 3 months at Bodhi Monastery in New Jersey after he moved back to the states. Bhikkhu Vappa also took me to visit a couple of other long time western monks, one in Kandy and the other in Bandarawela before I finished Peace Corps.  I remember needing to learn the proper etiquette for being with a monk in public.

I later found out that Bhikkhu Vappa changed his name to Bhikkhu Nyanatusita and took over Bhikkhu Bodhi’s responsibility as editor of the Buddhist Publication Society.  He’s still presently serving in this role. If I go back to visit Sri Lanka I hope to visit him again.

I am very grateful to Bhikkhu Vappa (Nyanatusita), as he was my first substantial connection with the Dhamma. He encouraged and supported me in taking my first steps on the path. I feel very fortunate to have crossed paths with him and to have had these very impressionable experiences and in depth discussions on life and the Dhamma. These experiences greatly impacted me and give my Dhamma practice a much greater context.